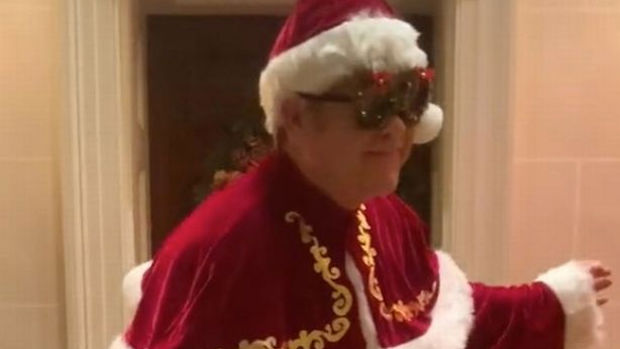 Sir Elton John and David Furnish's two sons have remained largely out of the spotlight, with the singer asking for fans to respect his private life ... until now.

Sir Elton John is getting in the Christmas spirit!

The 'Rocket Man' singer and his husband David Furnish gave fans a rare glimpse of their two sons Elijah, nine, and Zachary, seven, as they decked the halls in a fun new video as part of TikTok's #StepIntoChristmas challenge.

We were so inspired by all of your amazing ##StepIntoChristmas videos, we made our own! 🎄🚀 ##christmas

Set to his 1973 holiday classic 'Step Into Christmas', the heartwarming video features the family of four transforming from their everyday attire into fun festive outfits.

In the clip, they each take turns disappearing behind a door with a wreath on before reappearing dressed as Santa and his elves.

Alongside the fun-filled video, Elton wrote: "We were so inspired by all of your amazing #StepIntoChristmas videos, we made our own!"

This isn't the first time the family got a little festive on TikTok. In October, they posted a similar dance video to John's 'Crocodile Rock' to ring in Halloween.