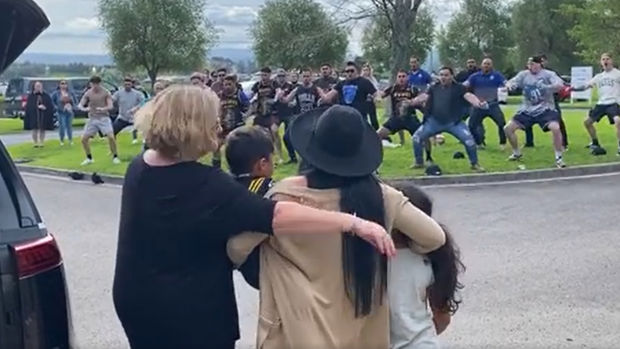 A group of friends and whānau performed a rousing haka for the widow and children of Sean Wainui as the rugby star began his final journey home for his tangi.

"This pain is unbearable. Kei te hoki koe ki tō whenua taurikura my baby māku koe e arahi. I know your waiting for us. We're on our way to gizzy bringing you home now baby," she wrote in the caption.

READ MORE:
• Sonny Bill Williams hits out at Instagram after photo of him praying before rugby game was removed
• Air New Zealand staff farewell the All Blacks with powerfully passionate haka at Auckland Airport

The couple had celebrated their first wedding anniversary just six weeks ago.

The 25-year-old died in a single-vehicle crash about 7.50am at McLaren Falls Park, near Tauranga, on Monday.

Wainui played 10 matches for the Māori All Blacks and more than 50 games for the Chiefs and Crusaders.