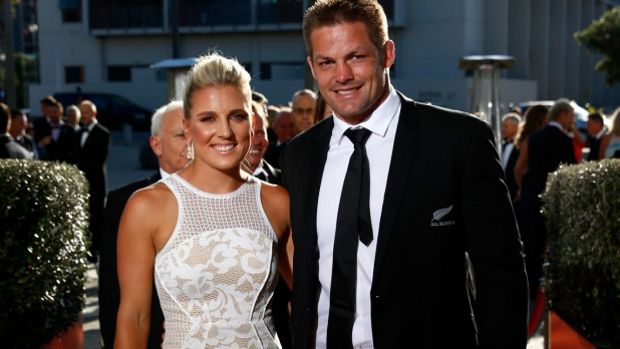 Taking to Instagram, Gemma shared a heartwarming never-before-seen photo from their wedding, which shows the rugby legend carrying his bride up a mountain.

"3 years married today. Time flies when you’re having fun," she wrote alongside the picture.

Gemma McCaw was recently named in the Black Sticks' squad as the team builds towards the 2020 Olympics, returning to the fold after having played 246 matches before retiring in October 2017.

READ MORE:
• Richie and Gemma McCaw share rare photo of their daughter in celebration of her first birthday
• Richie McCaw reveals he battled mental health issues during his All Blacks career

As a result of her increasing workload, she told Now To Love that her husband and her mother Michelle would both be stepping up to help out as she ramps up her training in an effort to make the Games.

Her mother would take a year off from teaching to help with Charlotte, while Richie, who now works as a helicopter pilot, will also scale down "so they'll share the care of Lottie when I'm training".

Is there anything cuter than a Dad swimming with his baby? 😍 These two have spent some quality time together this week while I’ve been training and secretly I think he’s the favourite 🤩 #daddysgirl

Gemma also opened up about her return to the Black Sticks, saying a part of her felt she had "unfinished business" with sport.

"I felt like I really missed getting out there with the girls and playing the sport that I always loved. I filled in for a club hockey game when Charlotte was four-months-old and I kind of crossed the line out onto the field and I had that white line fever again.

"That's where it all started. I was fortunate enough to play NHL and then some time in the Aussie league and that's when I guess I started to get a little bit more serious about it and think 'I would actually love to play again at that high level'.

"A year ago just before having Charlotte, I didn't think I'd probably be lining up back in the team. But [I'm] grateful for the opportunity and very excited with the year ahead and what's to come."