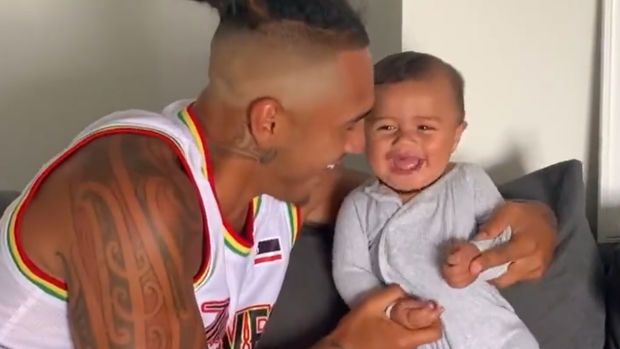 A heart breaking video of Sean Wainui teaching his eight-month-old son the haka is being viewed around the world following the rugby star's tragic death.

The 25-year-old Māori All Black, who died in a single occupant car crash near Tauranga yesterday, posted the video on Instagram early last year.

Wainui is survived by his wife Paige and their children Arahia and Kawariki, now aged two.

The video shows Wainui teaching the haka to a smiling and laughing Kawariki, who is standing on a couch.

The video has since gone viral as tributes continue to flow in for the rugby star.

READ MORE:
• Sonny Bill Williams hits out at Instagram after photo of him praying before rugby game was removed
• Air New Zealand staff farewell the All Blacks with powerfully passionate haka at Auckland Airport

"A warrior on the field and one of the great humans off it. My heart hurts. You'll be missed massively but never forgotten my brother," Anton Lienert-Brown wrote on Instagram.

Wainui played 10 matches for the Maori All Blacks and more than 50 games for the Chiefs and Crusaders.