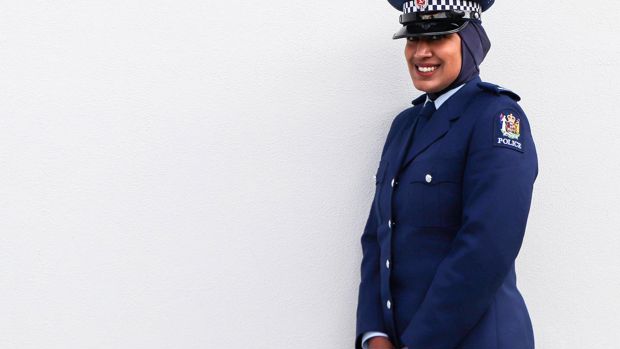 When the Christchurch terror attack happened, Zeena Ali was inspired to join the police to help her Muslim community.

And this week she will not only graduate as a police officer, but will become the first in New Zealand to don a police-issued hijab as part of her uniform.

Ali, 30, even worked with police to design a garment that is both functional for her new role and considerate of her religion.

Ali will be posted in the Tāmaki Makaurau area and is excited to get out on the beat.

"It feels great to be able to go out and show the New Zealand Police hijab as part of my uniform," she said.

"I think that seeing it, more Muslim women will want to join as well."

Ali was born in Fiji and moved to New Zealand with her family when she was a child.

She said she was proud to represent the Muslim community - particularly women - and hoped to inspire others to join the police and help broaden the demographic of the front line.

"It's great - the Police went out of their way to make sure the hijab I have on meets health and safety requirements as well as my own personal needs," she explained.

"I am proud to wear it and I hope other people out there will be proud of me as well."

Ali said she appreciated police considering her personal needs - both at college and in her role going forward.

"At college they had a prayer room and halal meals," she said.

"When I had to go swimming they were ok with me wearing long sleeves."

Valuing diversity is one of the six core values for Police - alongside professionalism, respect, integrity, empathy and commitment to Māori and the Treaty of Waitangi.

"We recognise the value different perspectives and experiences bring to making us better at what we do," Police said.

"We need people with a range of skills, backgrounds and experience levels - diversity is essential so that we can effectively serve the needs of New Zealand's communities now and in the future."

"As I started that process the Christchurch terror attack happened and that's when I realised more Muslim women were needed in the police, to go and support people with things like this.

"If I had joined the police earlier I would have been down there to help."

Police said there were certain qualities and skills they look for during the recruitment process as they worked to build a "high-performance culture, where different perspectives are valued".

"By reflecting the communities we serve and appreciating different thinking, we aim to achieve better problem-solving and results."

This article was originally posted at NZ Herald and reproduced here with permission.