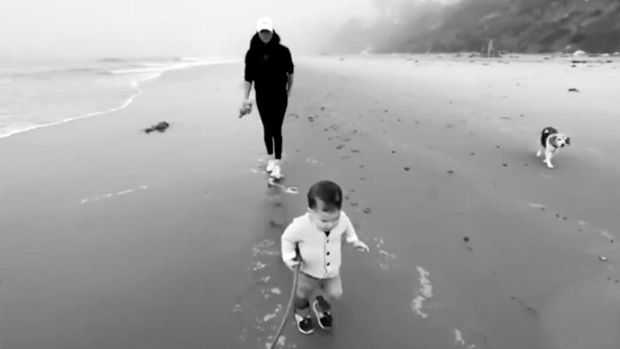 Despite all the tea being spilt in Meghan Markle and Prince Harry's interview with Oprah this week, we were most captivated by the rare video of their one-year-old son Archie running on the beach.

The never-before-seen clip was played out towards the end of their interview with the talk show queen, which aired on New Zealand screens last night.

In the video, the toddler, who is almost two, gives his mother a hug before he runs along the beach with one of the family dogs and through the legs of Prince Harry.

Archie, Meghan, Harry & the pups at the beach 😭🥺 #OprahMeghanHarry pic.twitter.com/xgnUYb8WBI

The footage is one of the only glimpses we've been given of Archie over the past year.

As the video aired, Harry spoke of how safe and free he feels being able to take Archie for bike rides now, a simple pleasure he never got to experience himself as a child.

"All of these things, I guess the highlight for me is sticking him on the back of a bicycle in his little baby seat and taking him on a bike ride which is something I was never able to do when I was young."

Harry said that Archie likes to point at objects and say "palm tree" and "house" when they drive past them.

The pair announced last month that they are expanding their family after previously suffering a miscarriage.