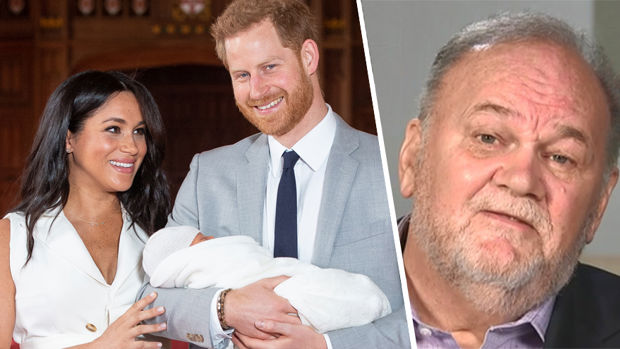 Meghan Markle's estranged father Thomas Markle had been keeping a low profile for a few months now ... that was until the Duke and Duchess of Sussex announced they would be stepping back as senior members of the royal family.

The 75-year-old former lighting director has spoken for the third time since the news broke, accusing his daughter and her husband of "insulting" Queen Elizabeth.

Thomas - who hasn't seen his daughter since before she married Prince Harry in May 2018 - told TMZ he is very "upset" with the couple following their public statement last week which took a swipe at Prince Harry's grandmother when they agreed they would not use Sussex Royal in their branding.

“After many months of reflection and internal discussions, we have chosen to make a transition this year in starting to carve out a progressive new role within this institution. We intend to step back as ‘senior’ members of the Royal Family and work to become financially independent, while continuing to fully support Her Majesty The Queen. It is with your encouragement, particularly over the last few years, that we feel prepared to make this adjustment. We now plan to balance our time between the United Kingdom and North America, continuing to honour our duty to The Queen, the Commonwealth, and our patronages. This geographic balance will enable us to raise our son with an appreciation for the royal tradition into which he was born, while also providing our family with the space to focus on the next chapter, including the launch of our new charitable entity. We look forward to sharing the full details of this exciting next step in due course, as we continue to collaborate with Her Majesty The Queen, The Prince of Wales, The Duke of Cambridge and all relevant parties. Until then, please accept our deepest thanks for your continued support.” - The Duke and Duchess of Sussex For more information, please visit sussexroyal.com (link in bio) Image © PA

Thomas said: "I'm very upset with Meghan and Harry right now. I don't think they have the right to use the word Royal.

"I don't think they have a right to speak to the Queen in the way they have spoken to her, I think it's an insult to the Queen and to the British people."

Thomas went on to claim that his daughter has a history of "dumping" those around her.

Thomas' scathing comments came following the announcement the Canadian government will be cutting the Sussex's publicly funded security in the "coming weeks," after their decision to step down.

The Canadian government traditionally covers the costs of police protection when world leaders and royals visit the country and have been doing so "intermittently" since the couple and Archie moved into a $14 million mansion on Vancouver Island in November.

However, as the pair step back from their roles as senior royals, Canada's Public Safety Minister said the Royal Canadian Mounted Police will stop paying for their security.

The 38-year-old former actress has been estranged from her father since he famously skipped her and Prince Harry's wedding last May amid fallout stemming from the staged photo scandal and him repeatedly speaking about the Sussexes to the press.

Harry returned to the United Kingdom last week for his final round of official royal engagements before he and Meghan officially step down on March 31.