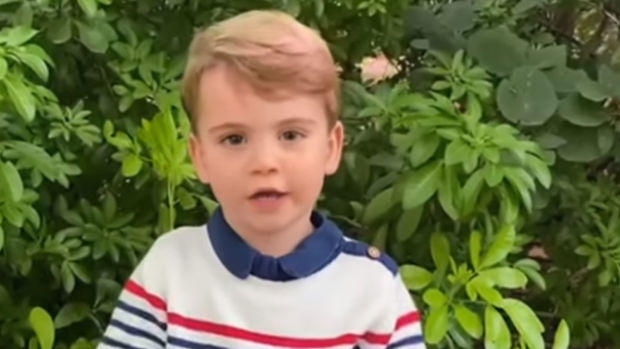 He may be two-years-old, but we have NEVER heard Prince Louis talk.

Until now ... and royal fans are delighted!

Taking to their social media channels over the weekend, the Duke and Duchess of Cambridge released the adorable new video of their three children taking turns to quiz the British broadcaster on questions about the natural world.

We've got some questions for you, @DavidAttenborough...🌍🕷️🐒

Seven-year-old Prince George kicked things off, asking Attenborough: What animal do you think will become extinct next?"

“Well let's hope there won't be any,” Attenborough responded. "Because there are lots of things we can do when animals are in danger of extinction. We can protect them."

Attenborough then goes on to share a story from 40 years ago about his time in Africa working with mountain gorillas.

Next up, Princess Charlotte revealed she likes spiders and asked the veteran nature commentator if he likes them too.

He told her: "I love spiders, I'm so glad you like them. I think they're wonderful things."

And lastly, Prince Louis melted hearts as he excitedly asked: "What animal do you like?"

The Duke and Duchess of Cambridge are delighted to share new photographs of their family with @DavidAttenborough. The photographs were taken earlier this week in the gardens of Kensington Palace, after The Duke and Sir David attended an outdoor screening of Sir David’s upcoming feature film 🎞️ ‘David Attenborough: A Life On Our Planet’. With a shared passion for protecting the natural world, they continue to support one another in their missions to tackle some of the biggest environmental challenges our planet faces. This includes working together on The @EarthshotPrize 🌍 the most prestigious global environment prize in history – further details of which will be shared in the coming weeks. When they met, Sir David gave Prince George a tooth from a giant shark 🦷 the scientific name of which is carcharocles megalodon (‘big tooth’). Sir David found the tooth on a family holiday to Malta in the late 1960s, embedded in the island’s soft yellow limestone which was laid down during the Miocene period some 23 million years ago. Carcharocles is believed to have grown to 15 metres in length, which is about twice the length of the Great White, the largest shark alive today.

To which the environmentalist revealed his favourite animal are monkeys because they’re "such fun" and can "jump all over the place."

It's the first time royal fans have ever heard the little Prince speak and the most George and Charlotte, five, have ever been heard.