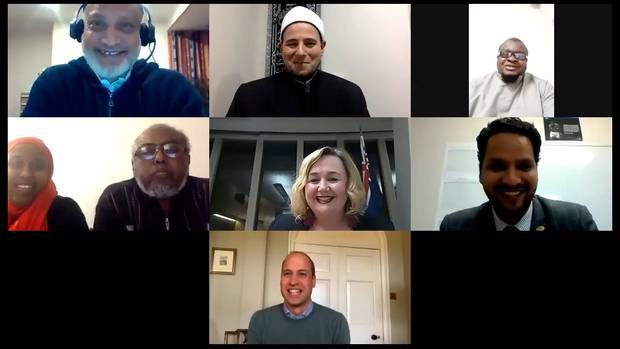 Prince William has dialled in Down Under to check on Christchurch's Muslim community a year after the mosque shootings which claimed 51 lives.

The Duke of Cambridge used Zoom to speak to the imams of Masjid Al Noor and Linwood Islamic Centre, along with prominent Muslim Association of Canterbury members and local MP Dr Megan Woods, last night.

At Al Noor Mosque in Christchurch The Duke of Cambridge met Qariah Omar, Zahra Omar and Rosemary Omar, who lost their brother and son, Tariq Omar, during the Christchurch mosques terrorist attack. Tariq was very gentle and humble, and dedicated to his faith, family, studies and football. He was a very protective brother. Tariq would walk an hour to get to the mosque, come rain or shine, every Friday. He loved football (with West Ham United his favourite team), and coached 15yr olds and 9yr olds football teams in Christchurch. On the day of Christchurch mosques terrorist attack Tariq's mother dropped him off near the mosque and went and parked the car. As she got out of the car she heard shooting. The night before he died Tariq spoke to his sister Qariah who told him the date of her upcoming wedding…he was so excited for her.

Gamal Fouda, imam of Masjid Al Noor, told the Herald that he'd been expecting the call all week.

The Duke says he was reconnecting with the people he met during his visit to Christchurch in the weeks after the terror attack.

During the 40-minute conversation, the group spoke about grief and healing, as well as the continuing effects that March 15 has had on their community. They also talked to the Duke about Covid-19 and how they have adapted to continue supporting their community during New Zealand's lockdown.

William finished the call by reflecting on the 2019 attacks and saying: "I'm really proud of all of you, the whole community and the New Zealand Government for how you have all dealt with such an atrocity. You are a role model for how something so tragic can be negotiated with the utmost grace and dignity.

“Our hearts go out to the families and friends of the people who lost their lives in the devastating attack in Christchurch. We have all been fortunate to spend time in Christchurch and have felt the warm, open-hearted and generous spirit that is core to its remarkable people. No person should ever have to fear attending a sacred place of worship. This senseless attack is an affront to the people of Christchurch and New Zealand, and the broader Muslim community. It is a horrifying assault on a way of life that embodies decency, community, and friendship. We know that from this devastation and deep mourning, the people of New Zealand will unite to show that such evil can never defeat compassion and tolerance. We send our thoughts and prayers to everyone in New Zealand today. Kia Kaha.” — The Duke and Duchess of Cambridge and The Duke and Duchess of Sussex.

"I only hope that it's been a year now and acknowledgement memorial of attacks go on at some point that Covid-19 has delayed and I only hope that brings further healing for all of you.

"But I stand here ready to help in any way I can. If there is more than needs to be done don't hesitate to reach out."