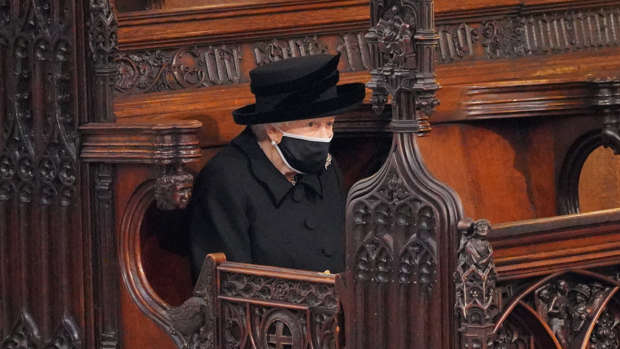 They had a love that spanned decades, and as she laid her beloved husband of 73 years to rest Queen Elizabeth II said her final goodbye with a touching letter.

The couple, who were married in 1947, famously penned love letters to each other over the course of their relationship - a tradition she continued one last time.

Sitting alongside a wreath atop of Prince Philip's coffin was a handwritten letter from the 94-year-old monarch, signed with her childhood nickname, "Lilibet."

Used by close family, Lilibet is the nickname Elizabeth received when she was young as she couldn't pronounce her own name.

Philip was known to use this term of endearment in his letters to her.

While it's unclear what else the letter - which was written on the Queen's stationery - said, photos appear to reveal that it read in part: "I love you."

Due to the global pandemic, the Duke of Edinburgh's service was an intimate affair with only 30 people in attendance.

During the service, Her Majesty sat alone in the pews of St. George Chapel at Windsor Castle, where she would regularly be seen with her husband by her side.

The televised funeral saw Philip's coffin carried on a custom Land Rover - which the Duke was involved in the design of.

Although it is tradition for only men to take part in royal funeral processions, Anne previously took on the role in 2002, during the funeral for her grandmother, the Queen Mother.

Philip died on April 9, at the age of 99, leaving behind four children, eight grandchildren and 10 great-grandchildren.