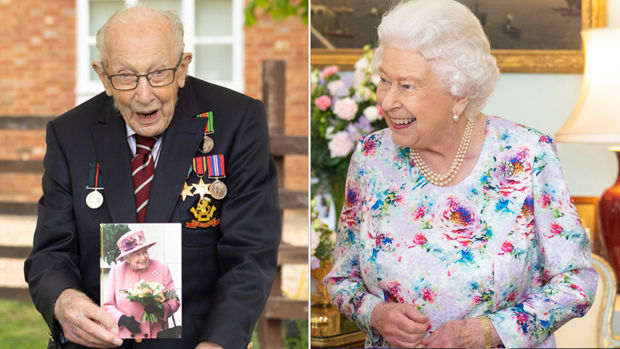 As beloved WWII veteran Captain Tom Moore - who raised over £26million for the NHS by walking laps of his garden – celebrated the historic milestone of turning 100-years-old yesterday, he received an extra special birthday card from Queen Elizabeth.

While Her Majesty sends thousands of cards to people celebrating their 100th birthday every year, Moore's card included a unique and personal touch from the British monarch.

A photograph of the inside revealed the personalised message read: "I am so pleased to know you are celebrating your one-hundredth birthday on 30 April 2020.

Just received a rather special birthday card from Her Majesty The Queen @RoyalFamily pic.twitter.com/jqIxpVFBRH

"I was also most interested to hear of your recent fundraising efforts for NHS Charities Together at this difficult time.

"I send my congratulations and best wishes to you on such a special occasion. Elizabeth."

“That wonderful man, Captain Tom, walking around and raising all that money - that sort of thing makes you proud to be British, doesn’t it.”

The Queen also sent Lord-Lieutenant Helen Nellis, her personal representative in Bedfordshire, to deliver the card to Captian Moore, which was sent with "her warmest wishes."

Moore, who was made an honorary colonel on his 100th birthday, took to Twitter shortly after receiving the card to thank the Queen.

Alongside a photo of himself holding the card, he wrote: "Just received a rather special birthday card from Her Majesty The Queen."

It was such an honour to present a message from HM The Queen to Captain Tom Moore (now Colonel Tom Moore) and to meet the gentleman who has inspired so much love in the nation #HappyBirthdayCaptainTom #CaptainTom100 #CaptainTomMoore pic.twitter.com/HYY4vP8Ncp