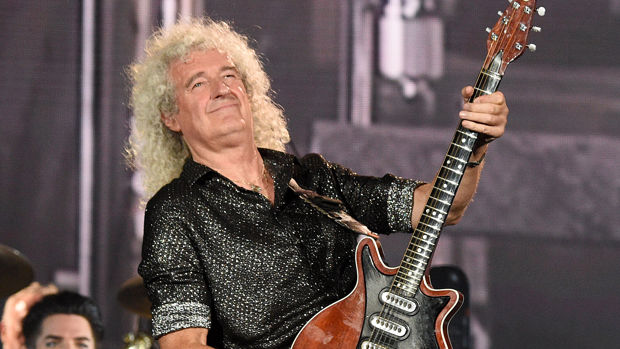 After admitting to tearing his gluteus maximus - the main muscle of the hip that forms the buttocks - while gardening during isolation, Brian May has also revealed further details of the incident that saw him being rushed to hospital.

The Queen guitarist opened up to fans that he had also suffered from a heart attack and had three blocked arteries that he "could have died" from.

Taking to Instagram, the music legend shared a video of himself describing the "saga" of incidents that had befallen him in May, starting with injuring his buttocks.

Hmm ... Sheer Heart Attack eh ? Well, I think I always worried a little bit about that album title. I wondered if it might upset some people who had actually had heart attacks. I’m actually quite relieved now that I’m in that club - and I don’t find it upsetting at all ! Take. care folks. And ... why did those discs in my spine get so squished? Well I think 50 years of running around with a guitar strap over my left shoulder holding a heavy guitar might have something to do with it ! But it probably WAS all worth it ! Bri

"I had an MRI and yes I did have a rip in my...my gluteus maximus," he said in the video, noting that he assumed the injury was the cause of the pain he was feeling.

However, a week later, the rocker said he was still in "agony," leading him to have an MRI of his spine, which revealed a compressed sciatic nerve.

The nerve, May said, was "quite severely compressed and that's why I had this feeling that someone was putting a screwdriver in my back."

My first walk in the park since this all began. My ... the air feels good ! Sky is blue - sun is clear and bright and warm and the breeze is cool. White fluffy cloud scud over my head. But I’m dependent on these ‘crutch’ devices to get around. There’s always ONE snag !! Well, not for long, hopefully. I’ve been through these scrapes plenty of times before. They make you stronger, right ?! If they don’t kill ya !! Well, I’m not planning to check out just yet !!! Rock on out there !! Isolate !!! Photo by Phil Webb, who bought me an ice cream - Thanks Phil - lovely day !!! Bri

But that's not all ... while still enduring pain, the 72-year-old revealed he also suffered a heart attack.

"In the middle of the whole saga of the painful backside I had a small heart attack," he said, adding that he endured around 40 minutes of pain and chest tightness.

"I actually turned out to have three arteries which were congested and in danger of blocking the supply of blood to my heart," he said.

The musician told viewers that he opted to have three stents put in, after admitting that he was shocked when he discovered his condition, having thought he was a "healthy guy."

"I had no idea, I had great electrocardiograms and whatever, you know. Nothing could tell me that I was about to be in real, real trouble, because I could have died from that, from the blockages that were there," he said.​