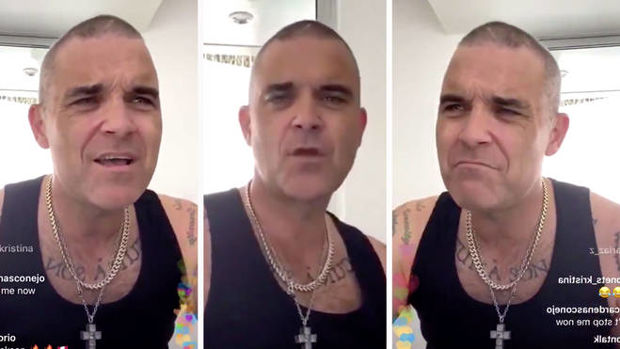 Robbie Williams is the latest star to entertain his fans while in self-isolation ...

And we think he may just be our favourite!

Undertaking a one-man karaoke session, the 'Rock DJ' singer filmed himself on Instagram Live, singing a wide variety of songs.

The 'Angels' hitmaker, who welcomed his fourth child with his wife Ayda Field on Valentine's Day, asked his two million followers for requests while also chatting to them about his life.

During the impromptu 90-minute session, the 46-year-old pop singer performed renditions of his own songs as well as covers of the Bee Gees' 'Night Fever,' Madness' 'Our House' and Taylor Swift's 'Shake It Off.'

Last month, Ayda announced the birth of Beau Benedict Enthoven via the same surrogate who carried their daughter Coco.

📹 IG | @robbiewilliams dancing to ‘Shake It Off’ on his Instagram live today pic.twitter.com/4z2FyyX9eo

Robbie - who also has Teddy, seven, Charlie, five, and Coco, 14 months, with wife Ayda Field - admits fatherhood has changed him.

"Back in the 1990s, it used to be strippers and cocaine. Now it's hummus and celery – and my life is much better for it."

Robbie Williams has been doing daily karaoke videos and honestly it has been my highlight of quarantine pic.twitter.com/bsntH0WKyc

Watching @robbiewilliams perform 90 minutes of karaoke in his house was just what we needed tonight. He even did a bit of Madness... pic.twitter.com/N5v41ZZFm5