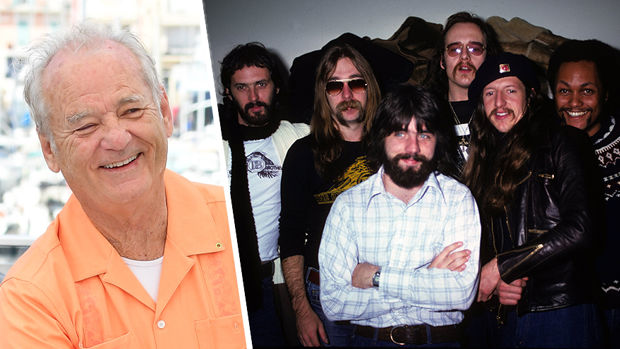 While Bill Murray is best known for his hilarious sense of humour ... he may have just met his match!

The Doobie Brothers have taken a cheeky swipe at the 70-year-old actor in a humorous legal letter from their attorney, Peter Paterno.

The veteran rockers have threatened to take action against the Groundhog Day star for allegedly using their music without permission in the advertisements for his golf apparel line, William Murray.

Accusing the company of using their hit song 'Listen to the Music' without paying for the privilege, the letter read: "It's a fine song. I know you agree because you keep using it in ads for your Zero Hucks Given golf shirts.

Bill Murray receives a legal demand from the Doobie Brothers. And it’s everything you’d want it to be... pic.twitter.com/R1L99yZSBj

"However, given that you haven't paid to use it, maybe you should change the company name to 'Zero Bucks Given.'"

It continued: "We understand that you're running other ads using music from other of our clients. It seems like the only person who uses our clients' music without permission more than you do is Donald Trump ...

"We'd almost be OK with it if the shirts weren't so damn ugly. But it is what it is. So in the immortal words of Jean Paul Sartre, 'Au revoir Golfer. Et payez!'"

Hilariously, Murray wasted no time in getting his own lawyer to respond to the band.

Attorney Alexander Yoffe, of Yoffe & Cooper, wrote: "First, I would like to compliment you on finding levity in the law at a time when the world and this country certainly could use a laugh. Your client's demand was able to cut through the noise of the news cycle and remind us how much we all miss live music these days.

"We would also like to confirm that both our firm, and the good folks at William Murray Golf, are indeed fans of the Doobie Brothers' music, which is why we appreciate your firm's choice of 'Takin' It to the Streets,' rather than to the courts, which are already overburdened 'Minute by Minute' with real problems.

He added in the letter: "As your client so aptly stated in this classic song in question, 'What the people need is a way to make them smile' -- which both Bill and the Doobies have been doing for decades, as world-class entertainers."

In the immortal words of the @TheDoobieBros—"What the people need is a way to make them smile."

And the lawyer closed the response by offering to send William Murray apparel to the Doobie Brothers and their legal representatives.

He wrote: "Please provide us with the shirt size for yourself, Tom Johnston, Patrick Simmons, Michael McDonald and John McFee, along with which of our client's shirts you find the least offensive.

"We will happily upgrade your wardrobes and hopefully win each of you over as new fans of the brand. At least that's 'what this fool believes'."