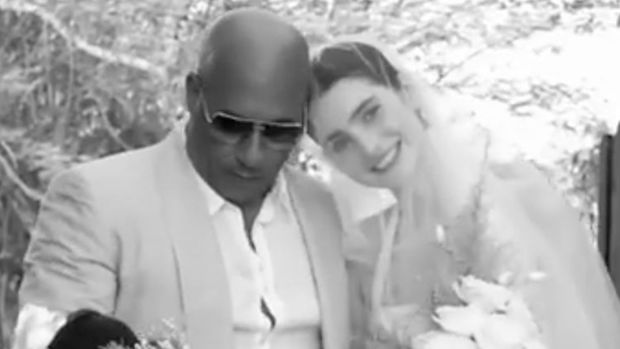 The daughter of late actor Paul Walker - whom he had with Rebecca Soteros - tied the knot with her boyfriend Louis Thornton-Allan earlier this month in the Dominican Republic.

Taking to social media over the weekend, the 22-year-old shared a sweet black-and-white video from their intimate beach wedding, along with a collection of photos.

In the photos, Paul's Fast & Furious co-star Vin Diesel - who is also Meadow's godfather - can be seen walking the bride down the aisle in place of her father, who passed away in 2013.

The heartwarming moment shows Diesel, dressed in a powder blue suit and sunglasses, linking arms with Meadow, who is all smiles underneath her sheer veil as she holds a bouquet of flowers in one hand.

Meadow and Thornton-Allan announced their engagement in August just weeks after publicly confirming their relationship.

The couple sparked marriage rumors earlier this month when Meadow shared a photo of the pair wearing matching wedding bands.

It has been nearly eight years since Paul tragically passed away as a passenger in a car crash at the age of 40.

Since her father's death, Meadow has continued his good works with the Paul Walker Foundation which according to its site seeks to "serve as an enduring light of Paul's unique spirit, far reaching goals, and spontaneous goodwill."

We're sure Paul would be so proud of her.