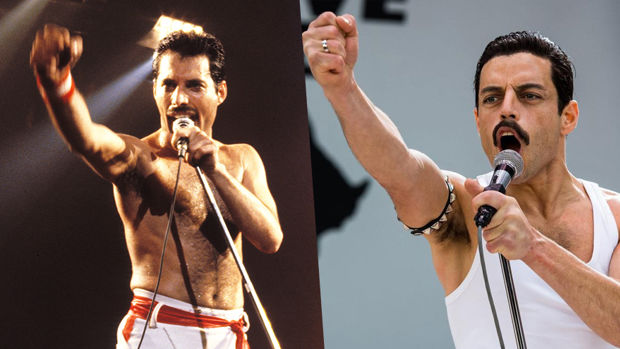 Bohemian Rhapsody, the new Freddie Mercury biopic has wowed movie fans all over the world.

This has been because of both the amazing story behind one of the world's most famous bands, and Rami Malek's spine-tingling portrayal of Freddie Mercury.

The highlight from the movie has been the final Live Aid scene, where Queen played at Wembley back in 1985.

While fans have praised Malek on how similar he was to Freddie, a recently released side-by-side comparison has blown everyone away with how identical the two performances are.

I DIDNT REALIZE THEY DID IT THIS PRECISELY pic.twitter.com/05f6ZW1TMn

One person commented: "These dudes were literally able to recreate the greatest live show ever performed and made a new generation be able to experience it as if they were actually there. This scene literally gave me chills."

Another said: "They did it precisely that I got confused which is the original and which is the remake. Omg not a sucker for him but daaaang this sure is historical!!!"

A third tweeted: "Well it's a biopic, not one bit is supposed to be fictional! It's actually impressive they managed to do it this precisely."

One person was impressed with the level of accuracy that went into the set.

"Saw this earlier today, so awesome. First thing I did after the movie was check out how accurate the Pepsi and beer were on the piano... spot on," he said.

When asked about his performance, Rami revealed that they watched the band's actual performance on YouTube over 1500 times to get every single movement perfect.

"That's something we tried to get move for move, even just gesture for gesture perfectly," he said.

"Every day we did (filmed) a song. Day one, Bohemian. Day two, Radio Gaga. Day three, Hammer To Fall and the Day-O. Four we did Crazy Little Thing Called Love. Five, We Will Rock You and We Are The Champions and on the sixth day we rested," he joked.

"Then we did the entire show which was the most phenomenal experience one could ever ask for," Malek said.

freddie mercury at live aid in 1985

What an amazing performance!