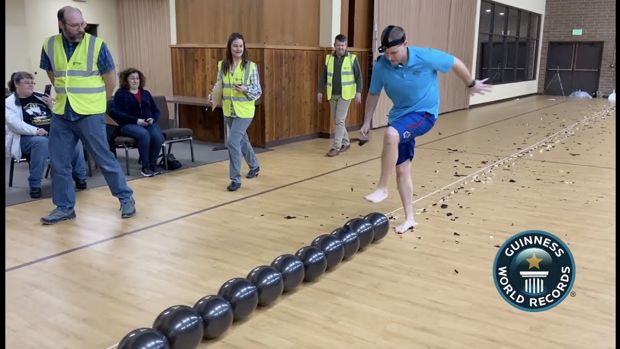 An Idaho man broke a Guinness World Record by popping 100 balloons with his feet in 23.69 seconds.

David Rush, who has broken more than 100 Guinness records to promote STEM education, said his balloon stomping record attempt was part of a presentation to a youth group about growth mindset and overcoming failures and setbacks.

Rush said it took him two tries to break the record because on his first attempt several of the balloons came loose from the tape that held them to the ground in a straight line.

He said one of the balloons came loose during his second attempt, but he was able to chase it down and pop it before dashing back to finish the line.

Rush finished his second attempt with a time of 23.69 seconds, beating the previous record of 29.7 seconds.

Mel and JT decided to give it a go today and had a 'Balloon popping Battle Royale'!

Watch the carnage below!

David Rush just set a new world record for popping 100 balloons in 23.69 seconds! Mel and JT took on the challenge and had a balloon popping competition! 🎈🎈🎈