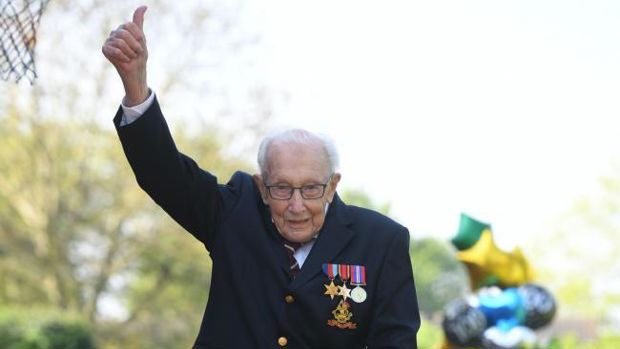 A 99-year-old war veteran has walked 100 laps of his garden to raise £16m and counting for the NHS.

Captain Tom Moore originally aimed to raise just £1,000 for NHS Charities Together by completing laps of his garden before his 100th birthday.

But he has smashed his target after nearly 800,000 people made donations to his fundraising page.

He's done it! 👏#CaptainTomMoore has completed his 100 laps before his 100th birthday live on #BBCBreakfast! 🙌
He's raised over £12 million for the #NHS
Well done @captaintommoore from everyone at the @BBC 💕 pic.twitter.com/rtil8gKKmJ

As he finished the challenge earlier, he said: "I feel fine, I hope you're all feeling fine too."

Capt Tom told the BBC the total amount raised so far was "an absolutely fantastic sum of money".

"I never dreamt I would be involved in such an occasion as this," he said at the end of his final lap.

Today I completed my final 10 laps, and although the mission is complete - I am going to keep on going.

Thank you all - now let's continue to support our NHS!