Prime Minister Jacinda Ardern will make a cameo appearance on The Late Show with Stephen Colbert tonight in an episode where he confirms he will visit New Zealand next month.

The appearance was a last-minute addition to Ardern's New York schedule. It was filmed today and will be aired tonight.

In the segment, Colbert says he had been keeping an eye on the Ardern-Trump meeting in New York this week.

He then shows a photo of them where Trump is giving a thumbs-up before jokingly adding: "Seen here, after both being asked about treason with Ukraine."

Colbert says he has a "special place in my heart" for Ardern because of her appearance on his show last year. 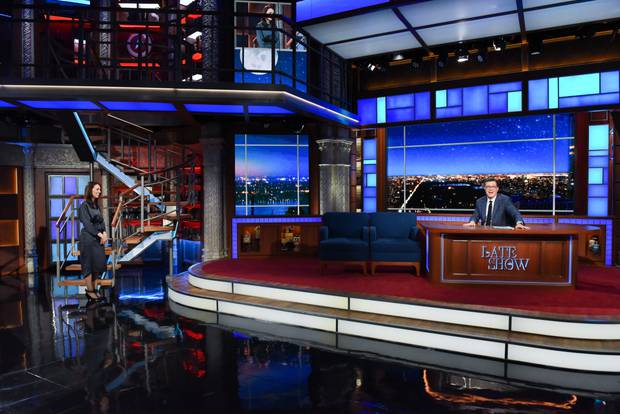 "She even invited me to come to New Zealand to become an official citizen of Hobbiton - not too shabby!

"This time of year in New York, you never know when you'll bump into somebody like New Zealand Prime Minister Jacinda Ardern."

Ardern then appears at the other side of the stage. "Hi Stephen."

When asked what she is doing there, she replies: "You said my name. I came out. I thought that's how the show worked."

She takes a seat and says it is a pleasure to be there.

"It's been a year since I last saw you. I invited you to come to New Zealand. You haven't been yet, which is a little awkward … We'd really love to have you."

Colbert then rifles through the pages of his schedule.

Ardern rules out this week as she is still "trying to save the world" at the UN, and Colbert rules out the week after because of "crabfest".

Asked about the following week, Colbert says: "I'm supposed to travel with my crew to an island nation south of Australia to film a serious of comedy segments, but I might cancel that and just go to New Zealand instead."

Ardern: "I'll pick you up at the airport."

Colbert: "It's a deal. I'm going to New Zealand in October."