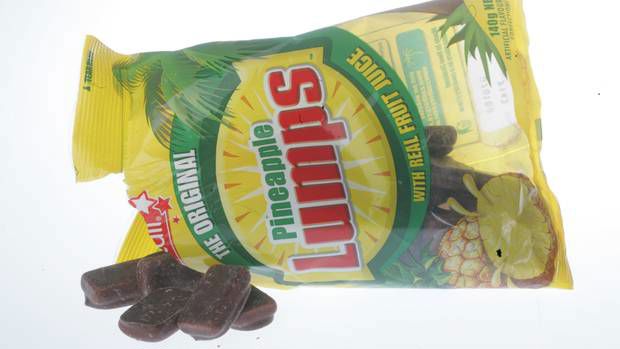 The last Pineapple Lump was made at the Cadbury factory in Dunedin this morning. Sadly operations are moving to Australia and the Pineapple Lump will be getting made over there, and being shipped back here.
I’m emotional about it all. So I wrote a poem. A really bad poem.

Today we say goodbye to a friend who was more than just confectionery
Look at you with your chocolate and pineapple and lumps, I became affectionery
Of all the lumpy fruit chocolate you were my favourite
I could down a bag in one go, and tried hard to savour it
Some people would even put you deep in the freezer
To make you last longer, you pineapple teaser
You leave our shores today to get made in Australia
Like Russell Crowe who went on to be Gladiator
But now we’re left wondering will you have that same taste?
Ohh ho you’d better or there’s a nation of angry kiwis that company has to face!
I’m sad to see you leave us, sad to see you go
Pineapple Lumps…you will indeed leave a lump…in my throat.

The last Pineapple Lumps have rolled off the assembly line, signally the end of Cadbury's 150-year legacy in Dunedin.

The production line came to a halt on Friday with the factory set to close for good next Thursday.

"It's been tough on people coming to work and their workmates of many years aren't there. The oldest serving member has been there for 38 years."

"[But] people are looking forward to the next phase in their lives, albeit with some anxiety and sadness."

Knight said the usual hustle and bustle of the factory floor has been replaced by a disquieting silence.

"When you stand at one end of the factory floor and you look to the far end where it's all been cleared out, it's clean as a whistle but also a bit spooky too."

"Because you know that up until a few months ago, it would have been 30 or 40 people working there, it was a hive of activity. So, to see it so quiet - it's ghostly, eerie."

Knight said most union workers had either found future employment or had plans in place, with some retiring and others taking time to evaluate their next career move.