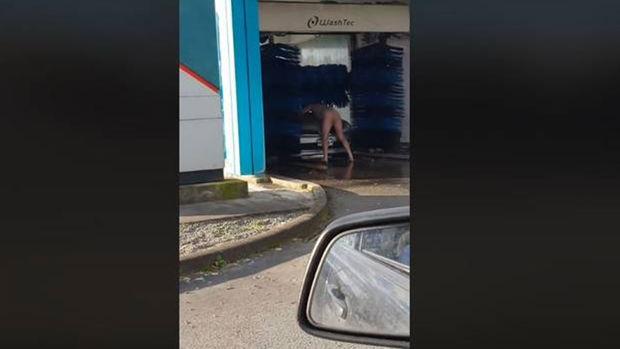 Cheeky footage of a naked man in a Rotorua car wash has gone viral.

The video, shot from inside a vehicle, shows a man seemingly hugging the front of a car going through a car wash.

It was uploaded to Facebook on Saturday afternoon and has had more than 359,000 views in just 20 hours.

Malo Harris, who spotted the naked man and filmed the video, posted it to Facebook with the caption "Don't do drugs, kids. Only in Rotorua".

"We were actually at the lights, and my hubby spotted the naked butt, so we did the quick swerve so i could record it," Harris told the Herald.

"At first I thought 'this guy has got to be on crack at the very least'. But the more I watched it yesterday, I thought maybe it was a dare."

She admits she did not expect the video to go viral when she first posted it. "Hell no, my phone is going off!"

According to Harris, comments in the video from those involved admit it was the result of a dare.

The video has received more than 2,400 comments (and counting) and has been shared nearly 5000 times.