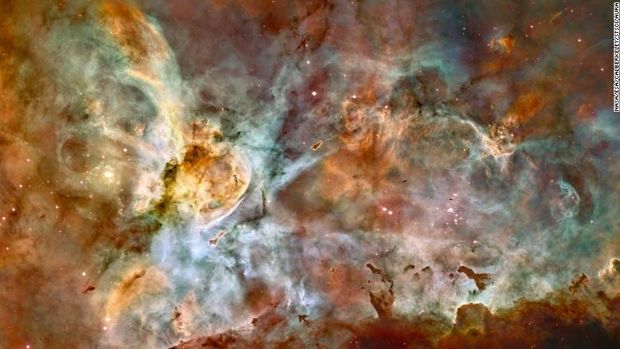 The Hubble Space Telescope captured this 50-light-year-wide view of the central region of the Carina Nebula, where a maelstrom of star birth — and death — is taking place. Image supplied by NASA.GOV

The Hubble was the first major optical telescope to be placed in space and has been showing us incredible photos of the universe 24 hours a day, seven days a week since April 1990.

#Hubble30 (2005) Galaxy Messier 51 (M51), also designated NGC 5194, is nicknamed the Whirlpool because of its prominent swirling structure. Its two curving arms, a hallmark of so-called grand-design spiral galaxies, are home to young stars, while its yellow core is where older stars reside. Many spiral galaxies possess numerous, loosely shaped arms, which make their spiral structure less pronounced. These arms are star-formation factories, compressing hydrogen gas and creating clusters of new stars. Some astronomers believe that the Whirlpool's arms are so prominent because of the effects of a close encounter with NGC 5195, the smaller, yellowish galaxy at the outermost tip of one of the Whirlpool's arms. At first glance, the compact galaxy appears to be tugging on the arm. Hubble's clear view, however, shows that NGC 5195 is passing behind the Whirlpool. The small galaxy has been gliding past M51 for hundreds of millions of years. For more information, follow the link in our bio. Credit: NASA, ESA, S. Beckwith (STScI), and the Hubble Heritage Team (STScI/AURA)

This year, NASA is celebrating the Hubble Space Telescope's 30th year in orbit, and even though most of the celebrations have been cancelled due to the coronavirus pandemic, you can still explore some of its amazing contributions online.

As part of the celebrations, NASA launched a place for you to see a picture of the cosmos on your birthday. All you have to do is select your birthday month and day and the generator will reveal a photo from its collection.

It is so interesting to see what was going on in the universe on your last birthday, granted you may not understand it all, but at least it still looks cool!