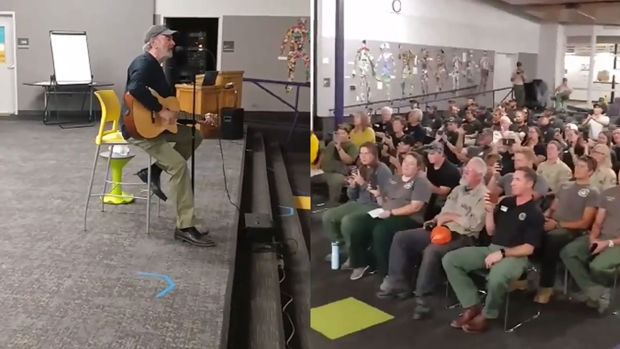 Singer Neil Diamond gave an unexpected performance for firefighters battling a blaze near his Colorado home.

The 77-year-old Rock and Roll Hall of Famer took to the stage Friday night to play "Sweet Caroline" for dozens of firefighters gathered at the command post for a fire burning near Basalt in central Colorado.

Video of the event shows Diamond thanking firefighters for their efforts to save his community.

Diamond retired abruptly from touring in January after he says he was diagnosed with Parkinson's disease.

Two people are accused of igniting the Lake Christine Fire on July 3 by firing incendiary tracer rounds at a shooting range.

The 20-square mile (51-square kilometer) fire has destroyed three homes. About 450 people are helping battle the blaze, which is mostly contained.