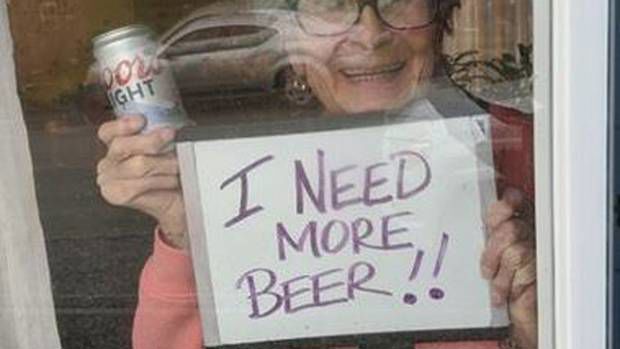 During the current coronavirus pandemic, Olive Veronesi was facing a serious problem: While quarantining herself to avoid catching the deadly virus, her beer supply was starting to run low.

So the 93-year-old woman from Pennsylvania decided to make a hilarious plea from the window of her home.

But it wasn't a plea for the lockdown to be over ... instead, it was a plea for more beer.

Olive was photographed standing at her window holding a can of Coors Light with a whiteboard that read: "I need more beer!!"

Naturally, the picture of Olive went viral, with more than 52,000 people sharing the elderly woman's antics.

Following the post going viral, several people offered to help drop off beer to her.

However, Coors Light came through and delivered 150 cans of Pilsner to her door - enough to last her five months in quarantine.

JUST IN: 93-year-old Olive Veronesi of Seminole, PA, who held up a sign at her window asking for more beer, has received a delivery from @CoorsLight. The brand tells me 150 cans arrived at her house today. pic.twitter.com/c2lfGFBBTS

After the delivery the 93-year-old said she was grateful for the donation, saying: "I have a beer every night. It's something to relax. It's nice, something for a young lady."