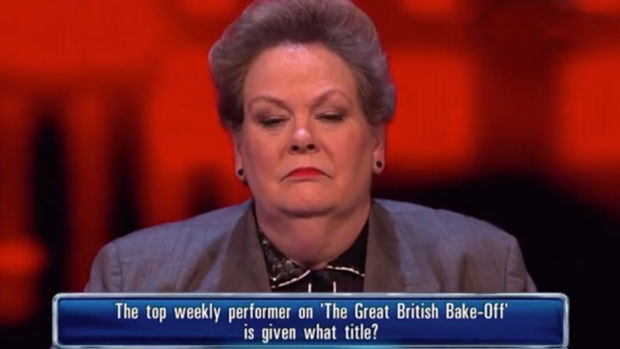 Fans of The Chase will know Bradley Walsh loves to take cheeky swipes at the Chasers.

However, viewers were left unimpressed during a recent episode of the quiz show, after Bradley made a joke about Anne Hegerty's weight.

Facing off against actor Adam Garcia, the 61-year-old brainiac - who is nicknamed "The Governess" - was asked a question about The Great British Bake Off.

The question was: "The top weekly performer on The Great British Bake Off is often given what title?"

The answers they had to choose from was head baker, star baker and master baker.

After both Anne and Adam gave the correct answer - which was star baker - Bradley decided to ask the Chaser: "Would you do Bake Off, Ann?"

To which she replied: "I don't think so."

While Anne took the joke in her stride and agreed saying: "That's a far point," ITV viewers were far from impressed with Bradley's remark.

Taking to Twitter they shared their outrage, accusing the host of fat-shaming.

Another said: "Bradley Walsh dropping fat jokes on the chase to the chasers. Getting a bit boring and rather rude."

"Personally I thought that was a bit nasty as he was referring to her being overweight," a third agreed.