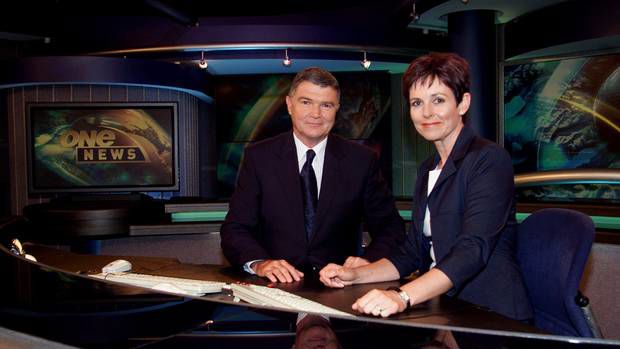 Richard Long and Judy Bailey are two of the several iconic faces to have read the news on New Zealand screens over the last fifty years. Photo / Supplied

Today TimeOut takes a trip down memory lane, with a look back at the primetime anchors on the state broadcaster, which began with Stevenson, Bill Toft, and Philip Sherry reading the news - solo - on a rotating basis.

Stevenson was the very first person to read New Zealand's nationwide television news. The advent of TV news reading was a formal affair, with no room for personality to shine through.

It was Toft who announced that daylight savings would be introduced on a trial basis - in 1974. His legacy inspired the Bill Toft Memorial Fund for Broadcasting, which provides grants to encourage excellence in broadcasting.

Goodwin became the first woman in the Commonwealth to present the primetime news bulletin in June 1975. The landmark achievement paved the way for future female broadcasters in New Zealand and abroad. She maintains her most emotionally difficult story to read was the 1979 Mt Erebus crash.

McCarthy's time on air marked a change in the traditional news reading style, and he was known for his more relaxed presenting. He had anchored major sports stories including the Christchurch Commonwealth Games. He began reading the then 6.30pm bulletin on April 1, 1975. He returned to sports presenting in 1980, continuing his career in public relations and later spent four years running The Arts Channel.

Sherry debuted on New Zealand screens at the start of NZBC. Following the introduction of TV2 and changes to news reading duties, he went on to host News at Ten and Eyewitness News, before returning to read the news for TV One in 1982. He was the sole anchor for 3 News when the channel launched in 1989.

There really is no better way to describe Judy Bailey than "mother of the nation". She joined NZBC as a reporter in 1971, before beginning her stint as one of TVNZ's longest-serving newsreaders in 1988. With TVNZ adopting the popular overseas style of pairing a male and female news anchor, Bailey initially presented the news alongside Neil Billington before beginning her 15-year partnership with Richard Long. In 2004, and amid cost-cutting, she was made the sole 6pm weeknight anchor. On December 23, 2005, she read her final bulletin after TVNZ announced it would not be renewing her contract.

Long began presenting the news alongside Sherry before teaming up with Bailey. He reported live from Aramoana following the 1990 massacre. He and Bailey presented the Sir Peter Blake memorial service in 2001. His contract was not renewed in 2003 following cost-cutting measures.

The current 1 News at Six presenters took over after Bailey's departure in 2005.

Wendy Petrie began her career at TV3 and also read the news for a Canadian news channel before joining TVNZ in 2003. Simon Dallow began reading the news for TV2's Newsnight in 1993 after working as a lawyer. The pair have presented the news together for 13 years.

* Information and profiles sourced from NZ On Screen, nzonscreen.com

Who: A cast of household names
What: The 50th anniversary of nationwide TV news
When: Sunday, November 3

This article was originally published at nzherald.co.nz and reproduced here with permission.