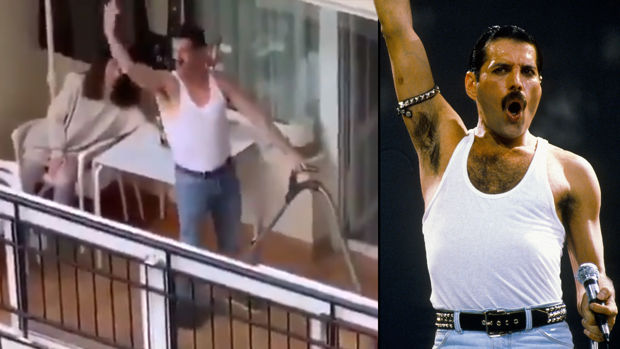 As we continue to be confined to our houses, people around the world are coming up with creative and entertaining ways to brighten their community's spirits.

Wich has led one French man to give his neighbours a hilarious performance of the Queen classic 'I Want To Break Free' from the comfort of his balcony.

Quarantined in France — this guy doing his best Freddie Mercury on the balcony while playing “I Want to Break Free” is the Twitter content I’m here for...🌎❤️😂🤣pic.twitter.com/YYtiz005gX

Dressed in Freddie Mercury's iconic Live Aid outfit - complete with light jeans, a white tank top and a studded belt - the unnamed man can be seen dancing along to the 1984 hit song.

But it wasn't just the outfit and moustache he had down pat, the man also replicated the moves from the song's dragtastic music video, all while equipped with a vacuum cleaner.

As neighbours watched on from their own balconies, the French entertainer was met with approving laughter.

And we're pretty sure even the legendary rockers themselves would be impressed.