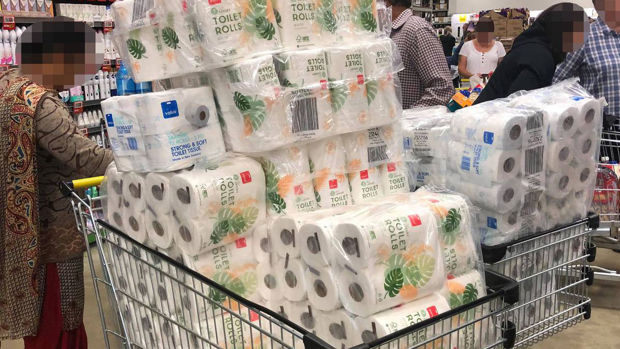 A heartbreaking picture of an elderly woman "in tears" as she stands in front of empty shelves in a Melbourne supermarket has gone viral for its powerful message.

The photograph - which was taken in the canned food aisle by Australia's Nine News journalist Seb Costello - highlights the devastating consequences people's panic buying behaviour is having on the elderly.

This captures who is suffering from the me-first, unnecessary, trend of panic buying.

As @ScottMorrisonMP it “has to stop”. @9NewsAUS @theage @ACurrentAffair9 #coronavirus pic.twitter.com/sFMx8RFeb7

Taking to Twitter, Costello shared the photo in the hopes it would stop people from hoarding supplies unnecessarily.

Alongside the image, he wrote: "Midday today. Port Melbourne Coles. Canned food aisle. I'm told she was in tears.

"This captures who is suffering from the me-first, unnecessary, trend of panic buying.

"As @ScottMorrisonMP said, it "has to stop"."

Australia's major grocery stores – Coles, Woolworths, IGA and Aldi – have been forced to take increasingly extreme measures, including police stepping in to help hand out toilet paper, strict limits on the number of items shoppers can purchase at one time, and a dedicated shopping hour for the elderly and disabled.