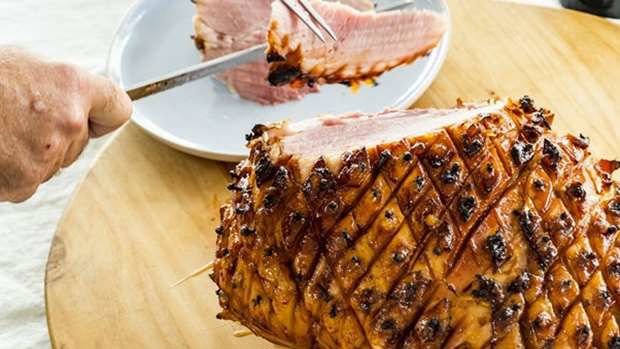 To make this glazed ham perfect: add water to the baking tray to stop the glaze from burning on the base of the ham; allow time for each layer of glaze to set before basting with another; and if your ham is beginning to colour too much during the cooking process, cover loosely with tinfoil. If there is any leftover ham, try it with some watermelon — it’s delicious! Wrap any leftover ham in a clean tea towel soaked in a mix of water and malt vinegar to keep it fresh.

1. To make the glaze, place all the ingredients in a saucepan and simmer gently for 5 minutes or until the glaze has reduced to a thickened consistency which coats the back of the spoon.

3. Remove ham from the fridge well in advance of cooking, allowing the ham to reach room temperature.

4. Peel off the skin, being careful not to tear the fat and leaving as much of the fat layer intact as possible. Use a sharp knife to score the fat diagonally to make diamond shapes (this is a two-person job as it helps having someone hold the ham). Stud with pieces of candied ginger so it is submerged into the ham fat, then stud with cloves.

5. Cover with tinfoil and cook for 30 minutes, then remove from the oven and discard the tinfoil. Add a little water to the bottom of the pan then baste the ham with a generous coating of the Tamarind Ginger Glaze and return it to the oven. Baste the ham frequently.

6. After being in the oven for 1 hour 15 minutes, it will be sticky and golden. (Cooking time is 45–55 minutes per kg. Ideal finished internal temperature is 62°C.)

7. Remove the ham from the oven and allow to rest before carving.

This article was first published on Eat Well and is republished here with permission.