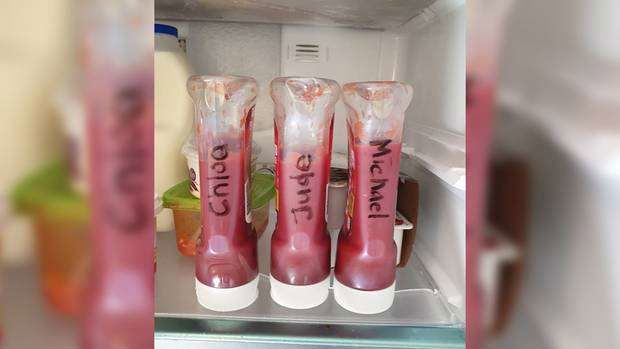 Need to slow down you tomato sauce intake? This tip is for you.

A Hamilton mum has shared a genius tomato sauce hack after her family was going through three tomato sauce bottles a week.

Leah Clemence told the Herald the idea came to her during alert level 3, when all her kids were home for the week.

Leah and her husband Neill Clemence have five children between both of them: Neill's son Jude, 13, Leah's son Michael, 11, and daughter Chloe, 8. The pair also have an 18-month-old and 7-week-old together.

After the family were going through half a bottle per meal, Leah decided that they couldn't keep going down this sticky situation and told her family: "That's it, you're all getting your own bottle of sauce."

"My son [Michael] was the worst out of all of us. He pretty much covered his dinner in sauce and then also puts a big dollop of sauce on the side," she added.

"My husband and I love [the sauce]. We are probably just as bad as the kids, to be honest."

The Hamilton mum went out and bought four bottles of sauce and labelled them, one for each of the older children and one for her and her husband and told the family it would need to last for the month.

She added that her daughter Chloe has even stopped putting sauce on some of her meals.

"It has just made such a huge difference," she said.

"It's cool to see the kids take responsibility for [their own bottles of sauce]."

Her daughter even cheekily warned her brother: "Y'know what it's gone, it's gone, you're not using my sauce".

The Hamilton mum decided to share the hack on the Facebook group Mum Hub as she thought it was a great idea for parents who struggle with their kids' tomato sauce intake.

Other mums agreed that it was a genius tip and said they need to put the system in place in their own homes.

"There were a few cheeky comments where people were like 'oh, I'm the one that need this, don't show my husband'," Clemence said.

Leah said she hasn't bought new bottles since three weeks ago and will continue to buy her family different bottles.

"If the family is going through a s*** load of sauce, I would definitely recommend doing this," she added.

At first, the kids squabbled over whose bottle was whose and eyeing out how much sauce everyone was using in their own bottle.

But eventually, they learnt how to ration their sauce to last the month.

"[They] have gone from covering their whole meals to having a tablespoon of sauce of the side. It's amazing. I was like 'wow this is really working'.