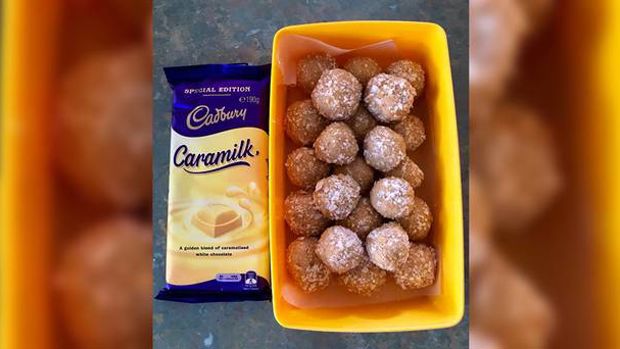 Kiwis have been going crazy for Caramilk ever since it made its big comeback earlier this year.

And now chocolate lovers are coming up with unique ways to incorporate Caramilk chocolate into delicious baked goodies.

One chocolate lover has posted her new creation called the "Caramilk bliss ball" which she has described as tasting "amaze-balls".

The balls contain coconut and crushed up biscuit as well as condensed milk.

And the response? Thousands of people have praised the idea as "delicious" and a "game-changer".

The poster said some people may prefer to melt their chocolate in the microwave but she prefers to do it in the slow cooker to avoid burning the Caramilk.

"Slow cooker on high (lid off). Break up the chocolate and put into the slow cooker to melt.

"While you wait for chocolate to melt crush your biscuits (I just use a ziplock bag and rolling pin).

"Once chocolate is all melted turn off slow cooker and add everything else in. Mix together well and roll into balls, and then roll into the extra coconut.

"Store in the fridge or freezer... These are Amaze-balls."

The woman's recipe has attracted more than 21,000 comments.

As one food lover put it best: "Yes It is confirmed, these little babies are seriously dangerous."