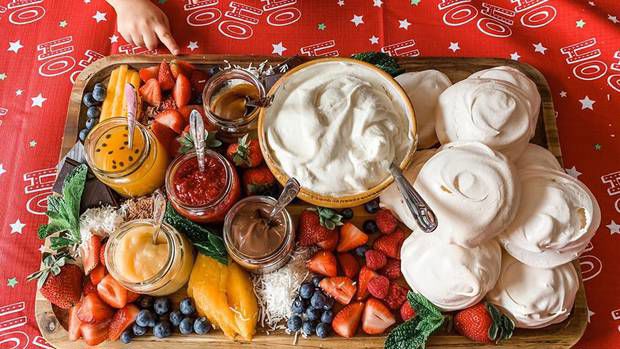 If you're wanting to impress the family with some Kiwi classics at the Christmas table, look no further than a DIY Pavlova board.

The debate about how to decorate the Kiwi pavlova has always been contentious, but now you can remove all the hassle by giving individuals the opportunity to make their own.

The DIY pav board was inspired by Shalini Nestor, the founder of Swish Biscuits.

The Canberra-based foodie told 7 News she's seen a similar creation but nothing quite like a pavlova grazing board.

"I came up with the idea because I've seen DIY pavlova bars and stations before, but I hadn't seen it on a grazing board where the toppings are actually on the platter/table which makes it look really inviting and abundant," she said.

"My family absolutely loved the idea and we had so much fun choosing how to decorate our own pavs; it was a really nice interactive way to serve dessert."

"My personal favourite combination is fresh mango slices with passionfruit and a sprinkle of shredded coconut, but I also tried one that was topped with salted caramel sauce, raspberries and a sprinkle of Flake."