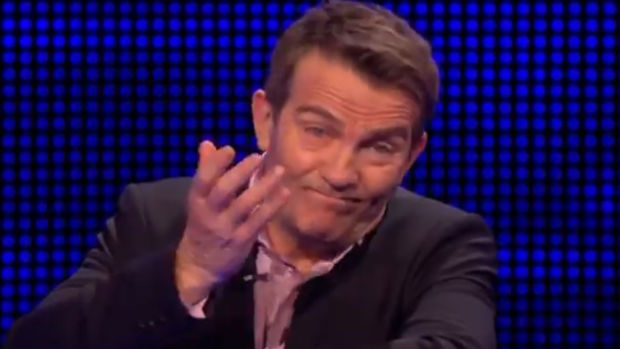 The Chase viewers were left giggling following a recent episode of the quiz show after one contestant had a "saucy" interaction with Bradley Walsh.

Facing off against Paul "The Sinnerman" Sinha, things heated up when Carol stepped up to the Chaser table.

As Bradley began to introduce her to viewers, Carol was quick to interrupt the much-loved presenter with a racy message for him.

Carol said: "I just want to say, my friends at Victoria Bowls club think you are gorgeous.

"And they told me to tell you that they lust after your body. But you don't need to worry because they are all over 65."

The 59-year-old host didn't quite know what to say to all of this, sheepishly replying: "That's okay. I'll come down and we can play skittles or bowls."

"You don't mind being a toyboy?" she asked Bradley.

To which he responded: "No I don't. Why have a toyboy, when you can have a real one."

Viewers immediately took to Twitter to talk about Carol and her cheeky ways.

One fan said: "I want to be like Carol when I grow up #TheChase."

"I like the cut of Carol's jib. She's great #TheChase," another said.

A third added: "Bradley's got a fan."

However, not everyone was impressed, with one viewer commenting: "Imagine an old male contestant talking like that to a younger female host ... just imagine it."

Carol made it through to the final with the chance to take home £18,000.

However, it wasn't meant to be and Paul caught Carol and her two remaining teammates with just 34 seconds to spare.

Bradley thanked the guests for their hard work and when he went to Carol, he said: "Tell the girls at the bowling club that I said hi."