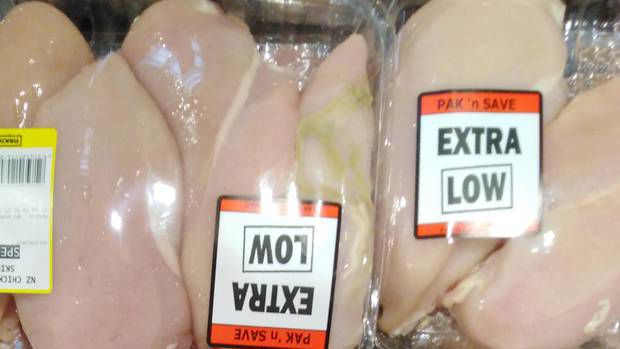 A photo posted to Reddit, showing green discolouration on chicken breasts for sale at a Bay of Plenty Pak'nSave, has sparked discussion on whether the unappetising hue poses any potential health risks.

The photo taken on June 28 at the Tauriko branch prompted dozens of comments from Reddit users who were quick to share their concern over food quality or offer ideas as to the source of the green colour.

Others were quick to point out that vegetarianism or veganism were options for anyone feeling squeamish about the photo, with one user adding: "Go vegan, you won't regret it. It's amazing and liberating not to have to either fight to remain ignorant or be disgusted and ashamed of the food you eat."

Another suggested an alternative was to "become a hunter, or get involved in farming, or buy organic meat that you know the source."

A Foodstuffs spokesperson told the Herald: "Foodstuffs North Island is currently investigating a potential chicken quality issue reported to our Pak'nSave Tauriko store – we have initiated corrective action and are liaising with MPI and our supplier, Brinks Chicken, to determine if any food safety risks are present.

There is clearly a quality issue causing the discolouration on some pieces of meat and once we know more we will be in a position to provide more information."

"At this stage no product withdrawal notices have been issued – should this situation change we will advise accordingly."

A Ministry for Primary Industries spokesperson told the Herald it is impossible to tell from a photo alone if the chicken is safe to eat but says it is essential producers and retailers are selling food that is both "safe" and "suitable" for human consumption.

"The Food Act 2014 requires that food for sale is safe and suitable, and the farmer, producer and retailer need to ensure this. Safe means that it won't make you sick, and suitable means it is what is says it is and packaged and labelled accordingly.

READ MORE:
• This woman's genius solution to the plastic bag ban is blowing people's minds
• Apparently adding coffee to mince is the secret to making the best nachos and spaghetti bolognese

"A retailer needs to obtain an assurance from their supplier that the product is safe and suitable.

"It is impossible to determine from a photograph alone if the chicken is safe to eat.

"MPI is following up with Foodstuffs North Island on this matter.

"If consumers have concerns about food for sale, they should talk to the retailer in the first instance. Consumers seeking advice about food safety can also visit www.mpi.govt.nz/food-safety/food-safety-for-consumers/ for more information."